A small but essential role in a Grand Design

The Sunday Times called it ‘real, ambitious architecture’. The Evening Standard referred to it as ‘both a landmark building and a well-insulated battleship defending the environmental cause’. Kevin McCloud repeatedly placed it in his favourite Grand Design projects.

However it strikes you, the most important thing is that Stock Orchard Street is a culmination of a vision. A vision of how architects Sarah Wigglesworth and Jeremy Till want their home, with its integrated workspaces, to be.

Almost 20 years from its completion, a couple of elements in that vision needed some attention, so these experienced professionals created a specification and sent that out to a number of providers. 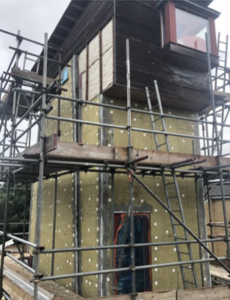 Sarah Wigglesworth Architects, who oversaw the retrofit project, chose Eden Facades because, as Jeremy Till explains, “They were not only recommended installers of the PermaRock external wall insulation system we were looking for but in particular, as well as being cost-effective, they showed a level of attention to detail that was important to us”.

PermaRock Mineral Fibre external wall insulation (EWI) systems are high-performance thermal insulation systems suited for application onto all building types. They give architects and specifiers the freedom to create buildings that are innovative as well as functional, and meet the high thermal performance requirements and aesthetic demands of modern architecture.

PermaRock systems are installed to provide the highest levels of fire resistance and non-combustibility. Incorporating non-combustible mineral fibre (stonewool) insulation (Euroclass A1 – BS EN 13501-1:2007 + A1:2009), systems with an A2-s1, d0 classification in accordance with BS EN 13501- 1:2007 + A1:2009 are tested and accredited for use on high rise buildings, including those with floor levels above 18 metres above ground level. In addition to their fire-resistant properties, the systems are also ideally suited for improving the thermal performance of existing buildings.

In the case of the Stock Orchard Street project, the architects had two elements in mind that needed addressing.

One was to the soffit of the undercroft that was a key feature of the design. Eden Facades replaced the previously installed system, which had been a ‘stopgap’ solution to get the project finished on time and to budget. Whilst it had lasted for nearly two decades, it was starting to sag and its appearance was poor. Insulation levels behind this were also insufficient. Replacing this proved to be quite a fiddly job, with the contractor taking down the old system and the main contractor refixing all battens using screws. Then Eden Facades replaced the sub-base boards, including cutting around the columns, and installing insulation. It was quite intricate work and it needed a lot of attention to detail to ensure the fit was correct.

The second element was on the tower, requiring the replacement of the existing wood wool panels. After twenty years, cracks appeared between the boards which meant some water ingress, so needed removing and replacing. Again, PermaRock was chosen as the solution for this part of the project, with the new breather membrane, sheathing board and insulated render being installed over the top of the existing studwork. This has given the equivalent look to the original, but with improved performance as a water-tight barrier.

Jeremy Till has been very complimentary about our approach, “Eden Facades were very attentive. I thought their project management was excellent, involving several visits by the project management team to understand the complexity of the project and the site logistics, and there were good lines of communication into the head office through the project managers. It was a fussy job, with the site team having restricted space to work in because of being on a compact site in London, as well having to work around the existing building structures. Despite the fact that they are known for some bigger commercial projects, they were committed to the project and we were very happy with the work Eden Facades did.”

Eden Facades’ Construction Director, Paul Michaelson, said “Whilst there were space restrictions on this site, we had to ensure that we followed the build-up recommended by PermaRock to ensure that the client’s warranty wasn’t compromised. Having the varied experience that comes from working across sites of differing sizes and natures, we could adapt our methods of working to ensure the standards were maintained despite the restrictions.”

Stay up to date with Eden Facades News.